Is Your Business Giving Your Staff the Right Sort Of Pay Rises?

One of the dumbest “customs” in business is to give staff a pay rise to celebrate an anniversary of service to the business.

Staff should not be rewarded in this way “just for turning up”.

There are many great ways of rewarding staff, and a pay rise on their employment anniversary is not one of those ways.

This is because this form of pay rise has nothing to do with performance.

In dentistry, the salaries of staff usually amount to a certain percentage of revenue generated by the dental practice.

In my practice staff wages amounted to 20% of practice production.

And so to keep it simple, every time we adjusted the fees in line with global inflationary pressures and measures, the staff salaries were also adjusted by an equal and same amount each time.

And the staff never complained.

One of the reasons my staff never sought extra pay rises was because we had a number of bonus systems in place in the practice that we paid to our staff, when certain goals and targets were achieved.

Some of those goals and targets that the practice set were monetary targets.

Other goals and targets were also performance based and were determined by certain Key Performance Indicators [KPIs] that different team members were performing anyways.

We simply wanted these team members to be conscious of what constituted certain “levels” of performance, ranging from unacceptable to acceptable, to good and to very good, and to outstanding.

Having goals and rewards creates consistency and encourages improvement.

“What gets measured gets improved upon.”

It’s very difficult to hit a goal you do not have.

And it’s also impossible to exceed a goal you’ve never made.

Setting performance based goals in your dental practice, and paying bonuses on achieving those goals creates a team unity within your organisation as team members attempt to make sure that all goals are achieved and surpassed.

Performance based pay incentives make much more sense than financially rewarding team members on their years of service.

Sure, take the team out to dinner to celebrate each team member’s employment anniversary.

Give them a trophy to acknowledge their increasing level of commitment to your business.

But stay away from the rabbit hole of giving pay rises to people jut because they’ve “stuck it out” with your business. 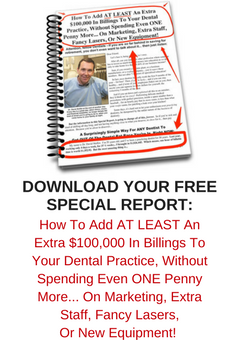